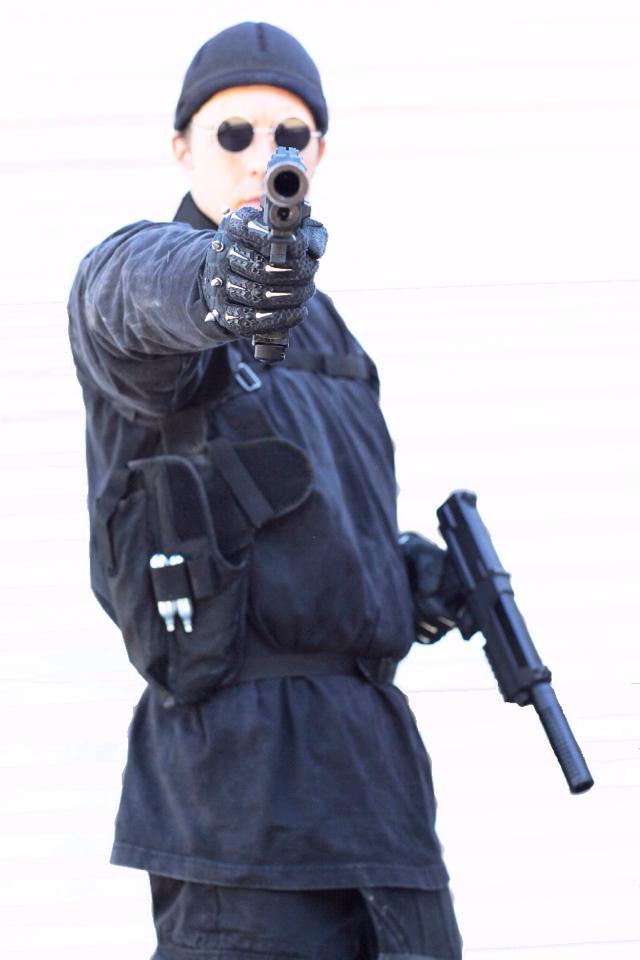 There is no doubt that when it comes to the sport of paintball David Justin, call sign “Reaper,” is very dedicated to the game and the people who play. Reaper is the maker and the host of the ShootUsoon podcast on Thursday nights.
Reaper was born in Los Angeles, California, but sometime in the 80s he had relocated to Israel and joined the Israeli Army. The military is where he learned most of his tactical moves that he uses on the field to this day. He learned while in the military that he was very great at close quarter combat, which is the main tactic he uses on the field.

Reaper got his name starting back in 2008. He always wore all black on the field and was quiet and fast. Some of the guys eventually told him he should be named “Reaper” because of his stealth and skill. So then on David Justin was known as “Reaper.” Reaper is known for carrying only 2 pistols out to the field. He is a very strong believer in “one shot, one kill”. If he would play everyday it would take him a month to use a full case of paint. He has been playing that way ever since he started back in 2008.
Reaper’s very first sponsor he had back in 2008 was Tiberius Arms. He also started his own woodsball league in 2008 called the WTL. It wasn’t until 2010 that he landed a sponsorship through Tippmann. Since 2008, Reaper has acquired 62 sponsors and counting.

Reaper has two main goals for his paintball career, to be a good guy and to grow the sport and the love of paintball. Most people focus on growing the sport within the sport; while Reaper believes to grown the sport you need to think outside the box (or however the sport). Attending red carpet events and getting people that don’t know about paintball to become a part of it. When asking him about it he said, “My goal is to grow the sport from the outside in, not from the inside out.” Reaper believes that being a professional paintball player is not just about playing. He likes to focus 50% on playing and 50% on promoting the sport.

The ShootUsoon podcast is what he likes to call a “paintball lifestyle show”. He focuses on getting to know his fans and fellow players as people by involving everyone and letting anyone be a co-host of the show. The show is also meant to promote players and to be their podcast. He takes pride in the fact that at times when he gets disconnected; the players on the show keep talking like they are at home. “I feel blessed to be in this position and to help people grow with me.”

Although there are other podcasts out there that deserve props, there are none like Reaper’s podcast on Thursday nights. This podcast is all about bringing everyone in the business together! He also prides himself on keeping his life and show self-confident and hater-free.
As well as promoting, Reaper is also a firm believer and advocate for things such as veteran’s causes. He often promotes organizations like War Dogs Making it Home; a program that adopts at risk dogs and pairs them with veterans. He also runs a page called “Cash and Kerry” that encourages people to pick up a veterans bill at a restaurant or a grocery store when the opportunity arises. As well as veteran’s causes, he likes to also promote safe play on the field. With his program “Barrel Safe than Sorry” he autographs barrel socks and gives them away at fields and events he attends to promote safe play within the paintball community.

David Justin “Reaper” is a pillar to the paintball community. With everything he does for this sport to promote it and help keep it alive and safe we are forever grateful. If you are interested in talking to him or going on the show visit his Facebook page at https://www.facebook.com/shootusoonpodcast?fref=ts.