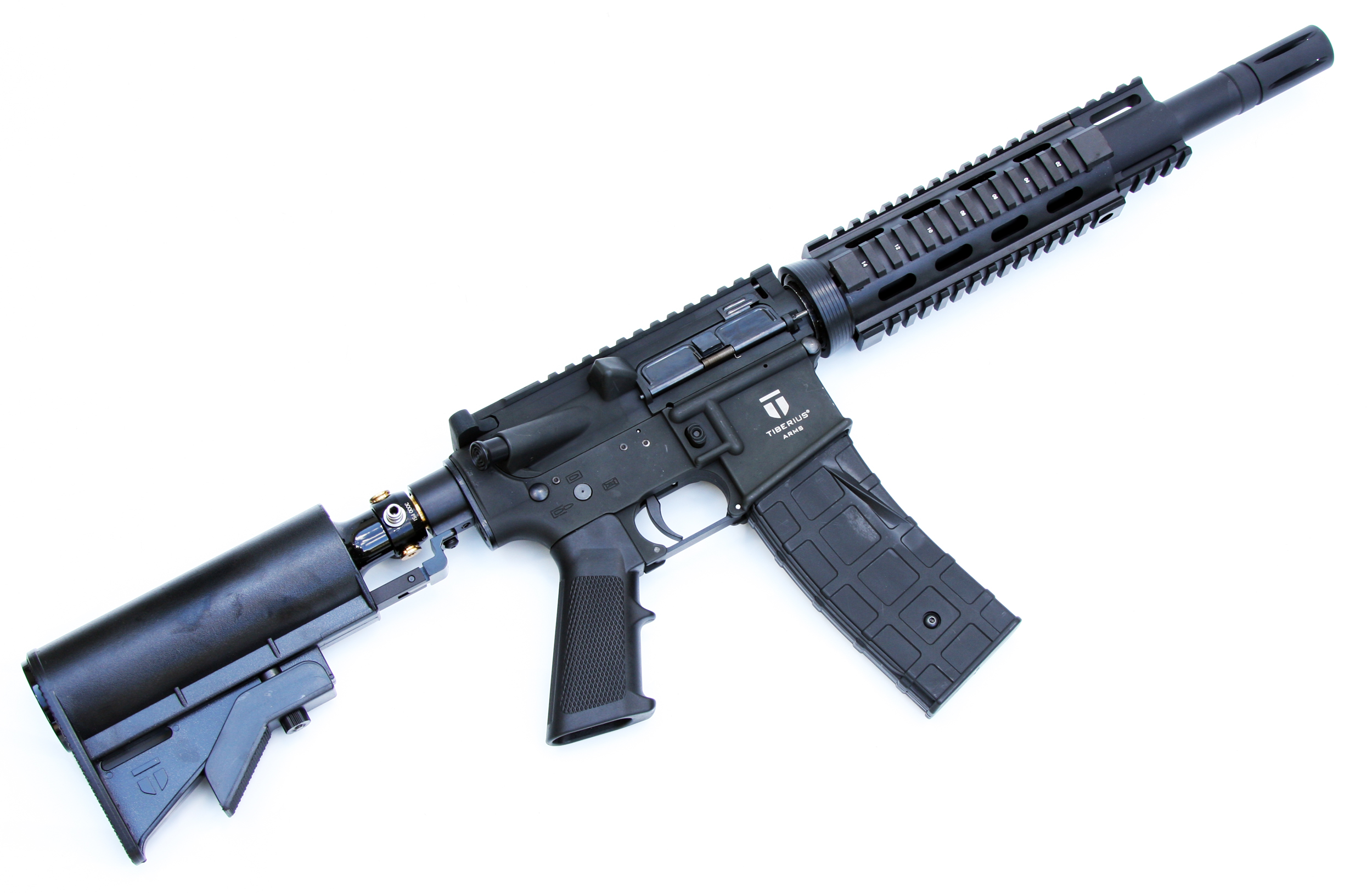 The growing mag-fed paintball movement sweeping the country continues to pick up steam, thanks in no small part to the ever-growing list of outstanding equipment available to players desiring a “real steal” paintball experience. One of the original mag-fed paintball companies, one unafraid to innovate with products like their 8.1 pistol and First Strike spin stabilized projectiles, is Tiberius and once again they’ve come out of the lab with an impressive product, an ultra-realistic magazine fed paintball gun called the T15. So realistic I wouldn’t leave the house with it in plain sight and impressively built, the new Tiberius T15 carbine boasts handling, looks and a feel almost identical to an M4 carbine or short-barreled AR15 making it ideal for serious training or any paintball player looking for the most realistic, magazine-fed experience available.

Delivered in a rigid, padded carrying case, the Tiberius T15 arrives with two of the company’s 19 round magazines capable of feeding First Strike rounds that offer much greater range and accuracy than any round paintball and that fit in the hand much like a modern polymer AR15 magazine. A military, law enforcement or security trainee, or anyone with experience with an AR-pattern rifle will immediately feel at home with the T15 in their hands, as the marker is standard with a “Lonestar” grip and all the controls are in the same places, look the same and even function in a similar manner. Cocking the carbine is achieved by pulling the top-mounted charging handle rearward and releasing it, while a forward assist, shell deflector, dust cover and functional magazine release are all present and accounted for, in their proper places. The T15 is built from light but durable aluminum and tips the scales, with an empty magazine inserted and its 13 cubic inch, 3000psi compressed air bottle/stock combo installed, at 5 pounds, 14 ounces. For giggles I put my AR15 over the same scale and they’re close, with the advantage going to the T15, though my AR is equipped with an Aimpoint red dot that added some weight to the equation. The top of the T15 receiver is cut with plenty of rails for the addition of a dot sight or scope, and the marker is equipped with plenty more accessory rails thanks to a quad-rail handguard that envelopes the marker’s barrel, ideal for fore-grips, lasers, lights or a bipod. A set of flip-up “iron” sights is included for players who want to run the marker with a slick top, and it’s worth mentioning that a hopper can be added to the T15 thanks to an included adapter, though we’re not too sure anyone would buy one with the intention of doing so and it might make a mag-fed purist ornery.

Pulling the T15 into the shoulder once cocked and ready to rock definitely feels familiar to anyone with any experience with an M4, M16-series or AR rifle. Players serious about their game may want to upgrade from the “Lonestar” pistol grip to something a little more ergonomic, and a vertical fore-grip or some rail covers might also be in order, though these are minor issues. With an extremely impressive “going rate” and a look and feel straight out of the gun shop, while this isn’t a paintball gun you’d want to be seen in public with, it’s an absolutely outstanding effort at bringing maximum realism to the world of paintball and once the T15 hits the market, it’s certain to turn heads, both at the staging area and when they’re hit with a First Strike round!